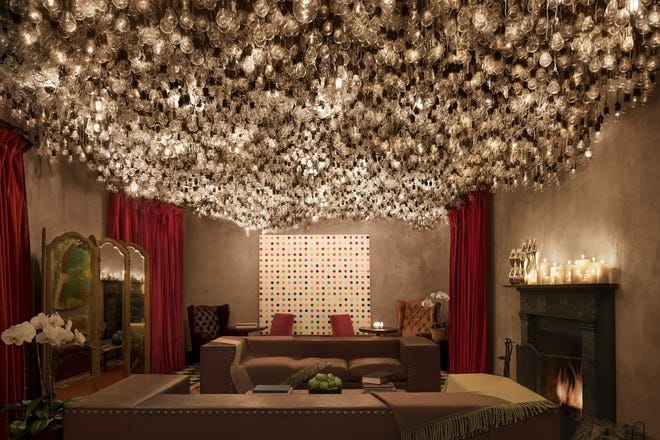 Whether you’re a newly formed couple or a long-married party of two, a sexy stay at a romantic hotel can change everything. This is not the time to take a gamble. No, when you’re looking to turn the heat up in your relationship, you want a spot that’s tried-and-true, oozing with sex appeal at every turn. These ten hotels are proven to offer that special dash of charm that you’re looking for in a romantic getaway.

From floor-to-ceiling silk and velvet drapery at the Soho Grand Hotel to access to a private enclave and a cozy fireplace bar at the Gramercy Park Hotel, these hotels have a firm grip on exactly what it takes to make your heart swoon.

Prefer cocktails, cuisine and culture? A spot like The NoMad Hotel is the smooth-talking third party to get your stay kicked into googly-eyed overdrive.

Below, we introduce you to the setting of your next romantic escapade with this list of ten of New York City’s most romantic hotels.

Brooklyn is America’s little darling of the moment, so this hotel’s phenomenal location is enough to keep romantics running back for more. That said, it’s not just the zip code that will make your heart go pitter-patter. Originally constructed in 1901 as a factory, this 70-room hotel is now a crown jewel of the Brooklyn scene. The Ides bar on the roof offers unobstructed views of Manhattan, and the rooms are downright gorgeous, due in large part to the exposed brick and abundantly streaming sunlight. If you can spring for it, you won’t be disappointed in any of the four lofts, each with standalone pedestal tubs and radiant floor heat.

Recommended for Romantic Hotels because: Floor-to-ceiling windows and stunning views of Manhattan are about as romantic as it gets. 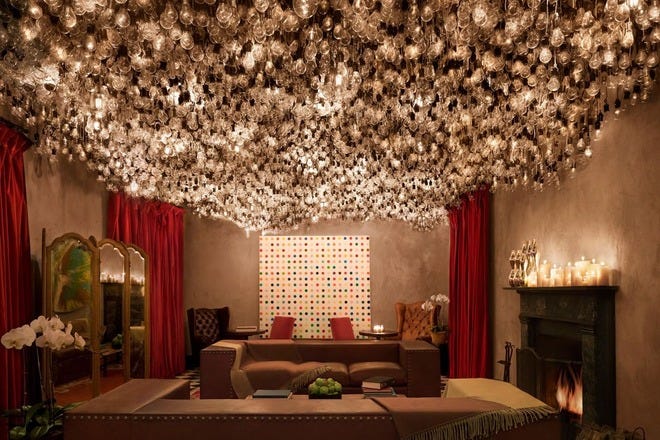 The Gramercy Park Hotel is a haven of romance right in the middle of the city. Modeled after the Renaissance period of the 1920s, the hotel is decorated with world-class art (Andy Warhol, Jean-Michel Basquiat), deep velvet drapes and throws, and mahogany, wooden furniture. The hotel’s Rose Bar is equally as enticing and offers the perfect backdrop for gazing longingly into your lover’s eyes. As if this gem weren’t romantic enough on its own, guests also gain access to the private enclave of Gramercy Park. Open only to residents and hotel guests, the park is a true sanctuary in every sense of the word.

Recommended for Romantic Hotels because: A private park, incredible art and the hotel’s cozy fireplace bar make this one a must on any romantic list. 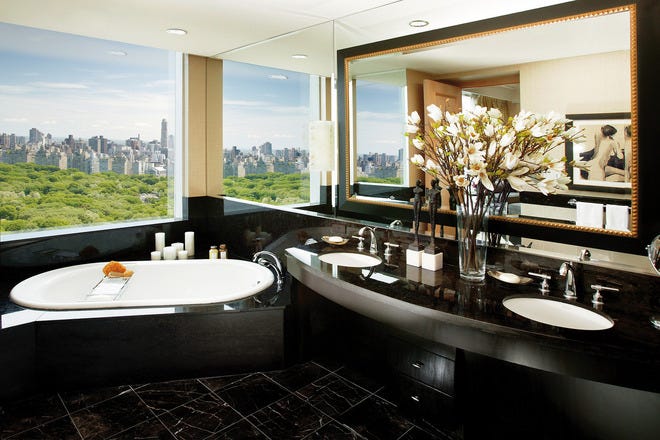 Located in Columbus Circle, Mandarin Oriental is the place to stay if you’re looking to be primped and pampered. As the only Forbes Five-Star spa in the city, the hotel offers lovers the chance to relax with one of their signature massages or facials in one of six treatment rooms, or the 650-square-foot, Asian-style VIP spa suite with fireplace, private steam and shower. Aesthetically, the rest of the hotel is swathed in tastefully luxurious gold accents and the 244 rooms and suites offer breathtaking views of the city or Central Park. If you’re looking to sweep someone off their feet, there aren’t many places that can top the Mandarin.

Recommended for Romantic Hotels because: The Mandarin is opulence exemplified, which always ups the romance factor.

The romance starts before you even open the door at the Nomo Soho, as the outside entryway beckons lovers to come for a stay. Ivy crawls up the iron-clad entranceway, and guests enter through an overhead forest of greenery set amongst wood-paneled floors. Once inside, the magic continues in the guestrooms, which are reminiscent of an upscale Greek island. Decked out in blue and white, the room’s crispness is a shocking surprise–in a good way. Contemporary touches lend a slight uptown vibe to the property, though the 10-foot floor-to-ceiling windows confirm that you’re definitely still downtown. If you’re looking for even more pampering, the Aire Ancient Baths are just a few doors down, and Nomo guests get bumped to the front of the line with priority reservations.

Recommended for Romantic Hotels because: Romance, crawling ivy and iron go hand-in-hand, and the Nomo ties them all together beautifully. 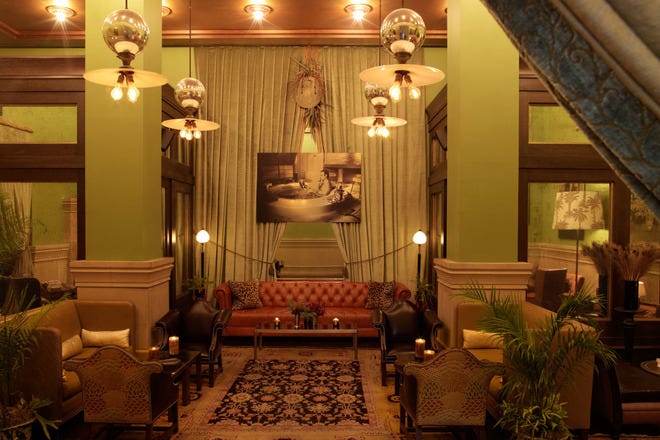 One of downtown’s original luxury hotels, the Soho Grand Hotel can still compete with any of the neighborhood’s newcomers. The New York Times says that the Soho Grand feels like home, and we’d tend to agree. That is if your home was bathed in soft, sexy light, adorned with leather lounges and the walls were draped with velvet hangings and million-dollar artwork. The Soho Grand feels like the home you’d have if you were a billionaire, right down to the hand-painted elevator doors. Adding to the romance is the hotel’s location; positioned right in the heart of Soho, where models and fashionistas sip martinis alongside celebrities in cool, downtown bars. If there’s anything unromantic about the Soho Grand Hotel, we’ve yet to find it.

Recommended for Romantic Hotels because: Because between the location and the decor, there’s romance oozing from every corner.

When your idea of romance is old New York, there’s nowhere better than the luxurious St. Regis in New York on 5th Avenue in Manhattan. From enormous floral arrangements in the lobby to your own private butler, there is no detail too small for the staff at the St. Regis. Recently renovated and redesigned, the 171 guest rooms and 67 suites are outfitted with textured fabric walls and marble entryways. The walls are hung with art and photography inspired by New York. John Jacob Astor IV, who first conceived The St. Regis, had the vision to create “the finest hotel in the world.” Well done, sir.

Recommended for Romantic Hotels because: Old-school romance never goes out of style, and the St. Regis does it best. 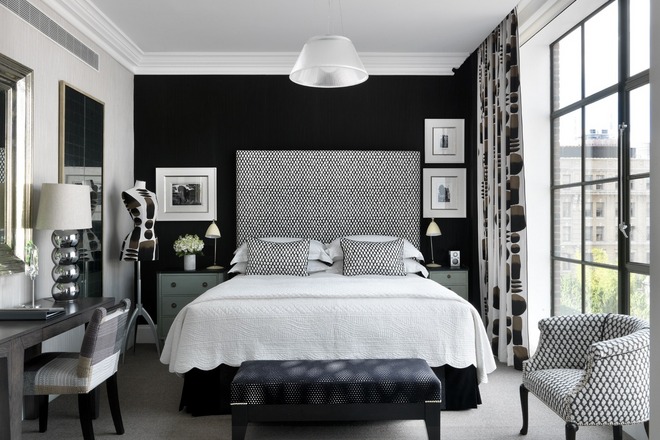 A hip, downtown take on a luxury hotel, Crosby Street Hotel has been attracting the cool kids since it opened in SoHo in 2009. Since then, the neighborhood has exploded, but the hotel has retained its cool factor while still managing to provide an attention-to-detail that’s unparalleled in the area. Decor in the 86 rooms is quirky, but elegant, a nod to the clientele that choose the Crosby as their home away from home. Outside, a leafy terrace and sculpture garden offer reprieve from the city’s crazy streets, while inside, a 99-seat screening room shows classic and new movies for hotel guests, the perfect place to cozy up when it’s cold or rainy outside.

Recommended for Romantic Hotels because: The leafy terrace and cozy rooms lead the way for a romantic stay.

Photo courtesy of The NoMad Hotel

Designed as a modern take on a Parisian flat (the city of love!), The NoMad Hotel calls a fully restored Beaux-Arts building home. Though New Yorkers and visitors flock to the restaurant and the hotel’s library bar, the rooms are masterpieces in their own rights. Decked out with original artwork, clawfoot bathtubs and Mahogany French writing desks, the 168 guest rooms feel less like a hotel and more like home. For the ultimate in romantic luxury, book the Suite Royale, 1800-square-feet of indoor/outdoor space with a separate entrance and a private terrace. Downstairs, Chef Daniel Humm keeps guests fed with signature dishes like the roast chicken stuffed with foie gras. After all, what’s more romantic than food that’s finger-licking good?

Recommended for Romantic Hotels because: Everything about this hotel–the bar, the food, the clientele, the clawfoot tubs, is romantic.

Read more about The NoMad Hotel → 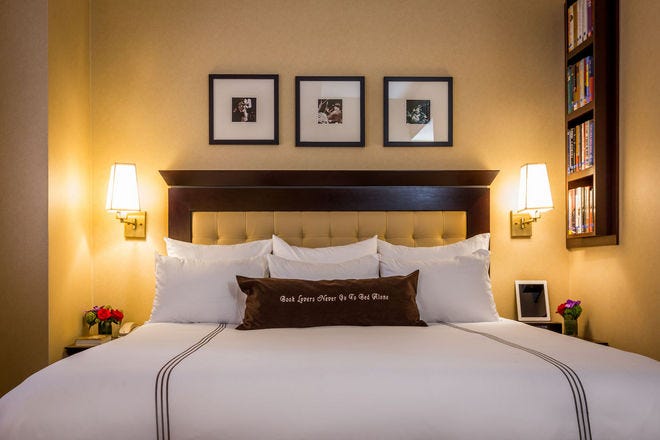 Some say if you go home with someone and they don’t have a bookshelf, you should leave immediately. If we’re going off that rule, The Library Hotel is the most romantic spot in the city. Each of the floors honors one of the 10 categories of the Dewy Decimal System. The 60 rooms are not only filled with the traditional hotel amenities but are also rich with books and art. Deep wood furnishings, befitting as a backdrop for a bespectacled librarian, add another notch to the sexy meter. Lavish continental breakfast and an evening Prosecco reception are two of the perks of staying here. But let’s be honest: it’s all about the books. The 14th Floor Writer’s Den and Poetry Garden provides sublime views of New York City’s architecture, while the private reading room allows access to hundreds of tomes. Sip a complimentary cafe au lait while you thumb through the pages and make eyes with your fellow intellectual.

Recommended for Romantic Hotels because: Because if books are the key to the bedroom, this hotel’s got romance under lock and key.

Read more about The Library Hotel →

An Instagram-worthy spot, The Bowery Hotel oozes charm a la the Olsen twins at fashion week. In fact, if you stick around long enough, you may even rub shoulders with the formidable duo in the lobby of this beautiful hotel. Floor-to-ceiling windows drench rooms in sunlight, though the decor is simple. But you’re in New York! The room is only part of the allure. Make your way to the outdoor veranda, sink into one of the comfy armchairs and order a classic cocktail. The hotel’s vintage vibe is the perfect place to sip an old-fashioned. If you can wrangle a spot by the working fireplace, you’ll have an excuse to stay inside and cuddle all winter long.

Recommended for Romantic Hotels because: The Bowery’s atrium couldn’t possibly ooze with more romance and class.

Read more about The Bowery Hotel →

A Unique Stay in Amsterdam West

Get Your Techno Fix and Dinner, Too 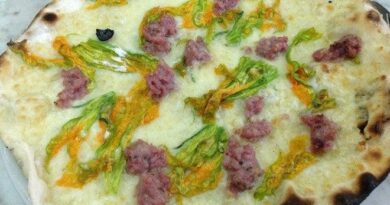