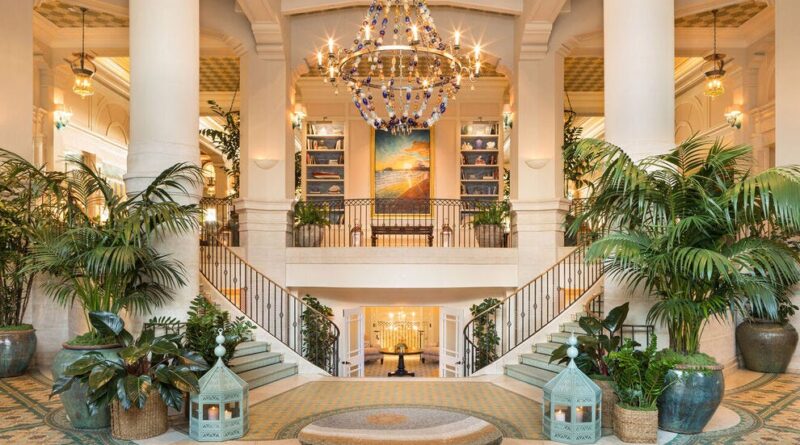 The Golden Globes, the Oscars, the Academy Awards — oh my! With awards season on the horizon, you can vacay like the stars with stays at some of Los Angeles’ most glamorous hotels.

Opened in 1927, this Spanish Colonial Revival gem was developed by movie royalty Douglas Fairbanks and his wife, Mary Pickford, Metro-Goldwyn-Mayer co-founder Louis B. Mayer and Sid Grauman of the famed Chinese Theatre nearby. Named in honor of former President Theodore Roosevelt, this was once home to the very icon of glamour, Marilyn Monroe. Her room, the Marilyn Suite, on the second floor, overlooks the Tropicana Pool, lined with David Hockney’s million-dollar swirls of paint and surrounded by 250 palm trees. Catch a cabaret or vintage movies in the intimate Cinegrill Theatre. Dine at The Barish, lauded LA chef-baker Nancy Silverton’s restaurant. Or order a burger at the classic diner and bar, 25 Degrees, where Murano glass chandeliers make this the most glamorous “burger joint” ever. 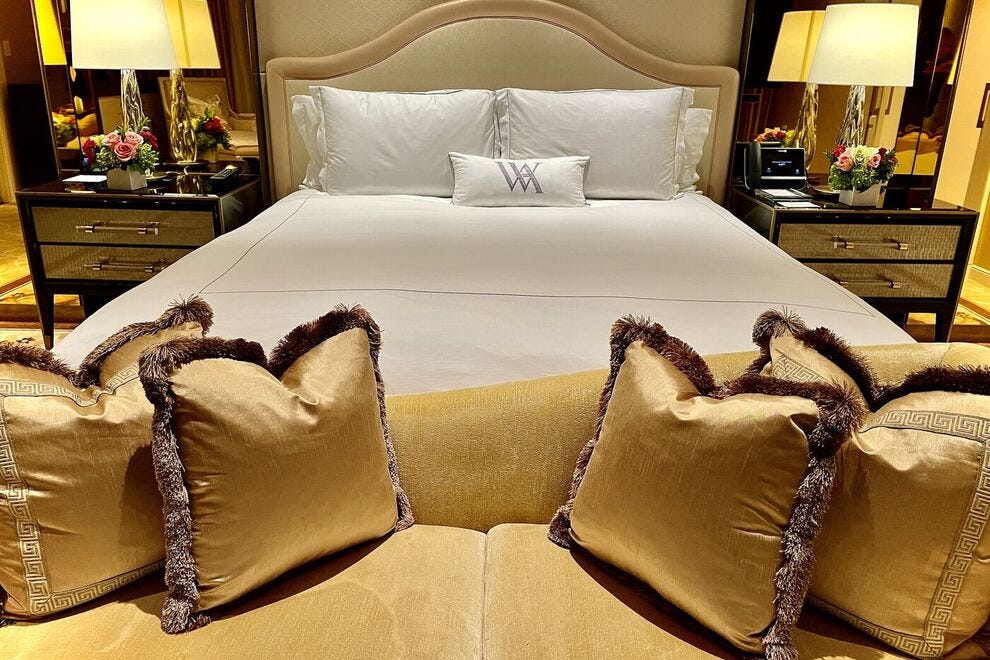 Opened in 2017, the Waldorf Astoria blends in seamlessly with the haute hotel establishment in this exclusive LA zip code. The grand lobby’s gleaming marble underfoot leads to the elegant, cavernous Jean-Georges Beverly Hills restaurant (French chef Jean-Georges Vongerichten’s western outpost). An elevator whisks guests up to the second-floor La Prairie Spa, where the veteran Swiss skin care spa’s signature facial puts a glossy spin on Beverly Hills A-listers. Up above it all, guests will find a rooftop pool deck with a saltwater pool and the exquisitely grand Presidential Suite, which includes a movie room and gym. Both deck and suite boast dreamy views of the city and mountains beyond. 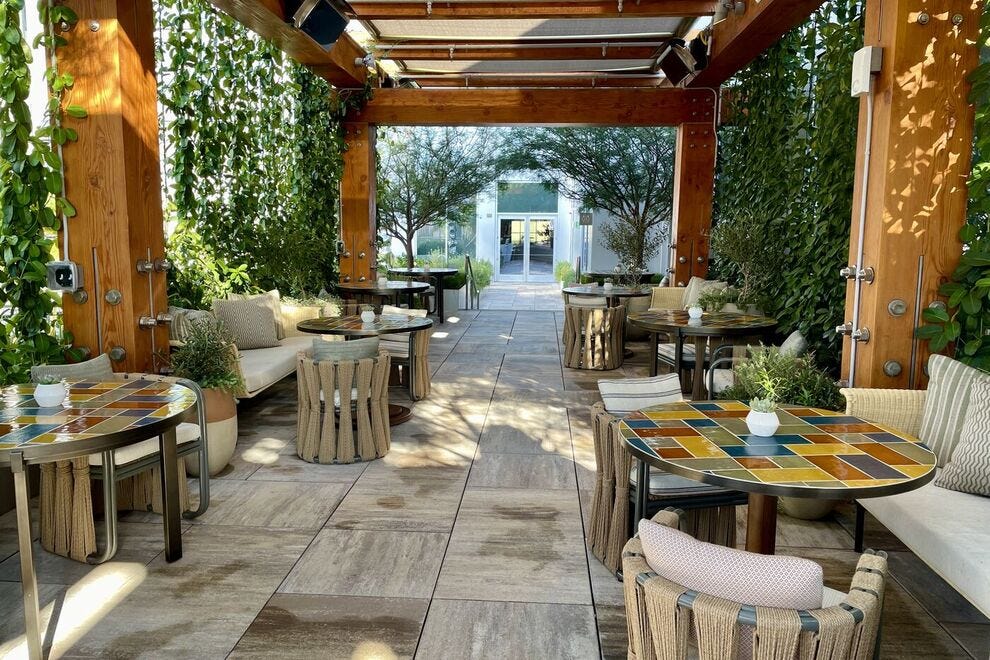 Newly opened in 2022, this top-level Hilton brand’s LA outpost is situated in the Frank Gehry-designed The Grand, an upscale shopping and apartment complex, opposite Gehry’s magical metal clad angular masterpiece, the Walt Disney Concert Hall. Both guest rooms and suites share the modern luxury of superb functionality in design — the very foundation of elegance — and supremely comfortable furnishings. The 10th floor lobby leads to four bright, airy bars and restaurants, courtesy of chef José Andrés — the most glamorous of which, Aqua Viva, is an exotic oasis, lined with tropical shrubbery and overlooking downtown LA. 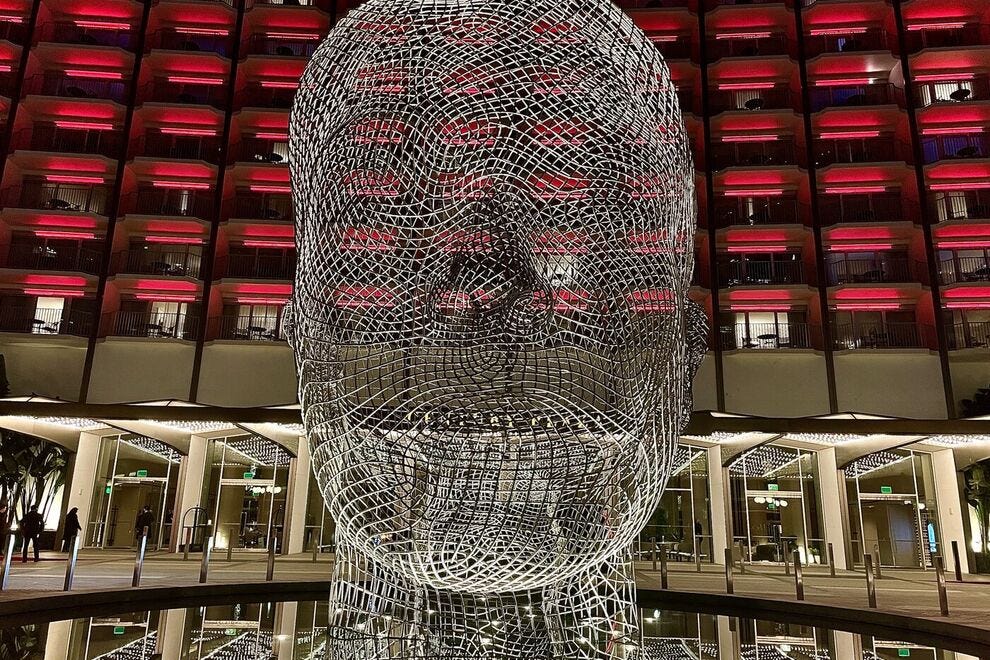 This architecturally spectacular historic hotel was revived via a $2.5 billion (yes, billion) renovation, turning the landmark Century Plaza hotel, dubbed the Western White House for the frequent patronage of Nancy and Ronald Reagan, into the Fairmont Century Plaza. The Japanese minimalist, nature-inspired aesthetic of the stone and wood interior honors original architect Minoru Yamasaki’s mid-century modern design. Near the lower-level ballroom — which regularly hosts Grammy, Emmy, and Academy awards — is a 14,000-square-foot wellness spa with hydrotherapy suites in the women’s and men’s locker rooms. The spa features a wealth of amenities, to include a hammam, a salt cave, “facelift” facials and homeostasis-restoring biohacking treatments. On the lobby level, enjoy jazz in the lounge and step inside the signature restaurant, Lumière, and be transported to a veritable Parisian brasserie! 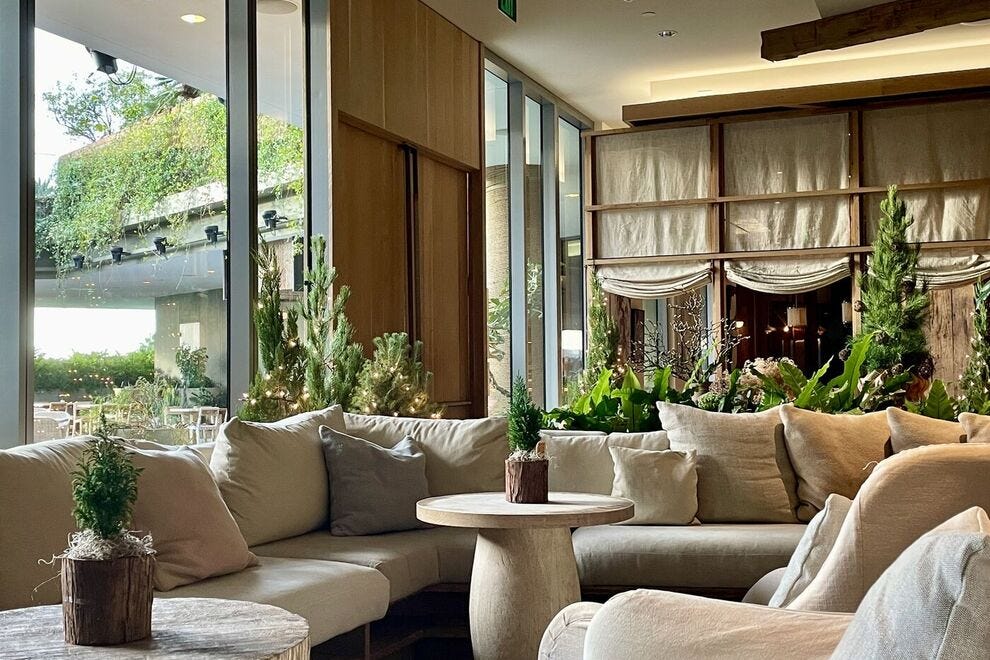 There’s nothing more glamorous than actively caring for the planet, and this eco-chic enclave goes beyond lip service when it comes to caring for our planet. You’ll be hard-pressed to find the usual single-use plastics and non-biodegradable products, and it all comes without sacrificing comfort, luxury and, yes, glamour. The open-plan eateries — 1 Kitchen and Juniper — overlook an urban jungle of greenery. The spacious guest rooms are finished with raw wood and natural fibers, creating a soothing place to get some beauty sleep. 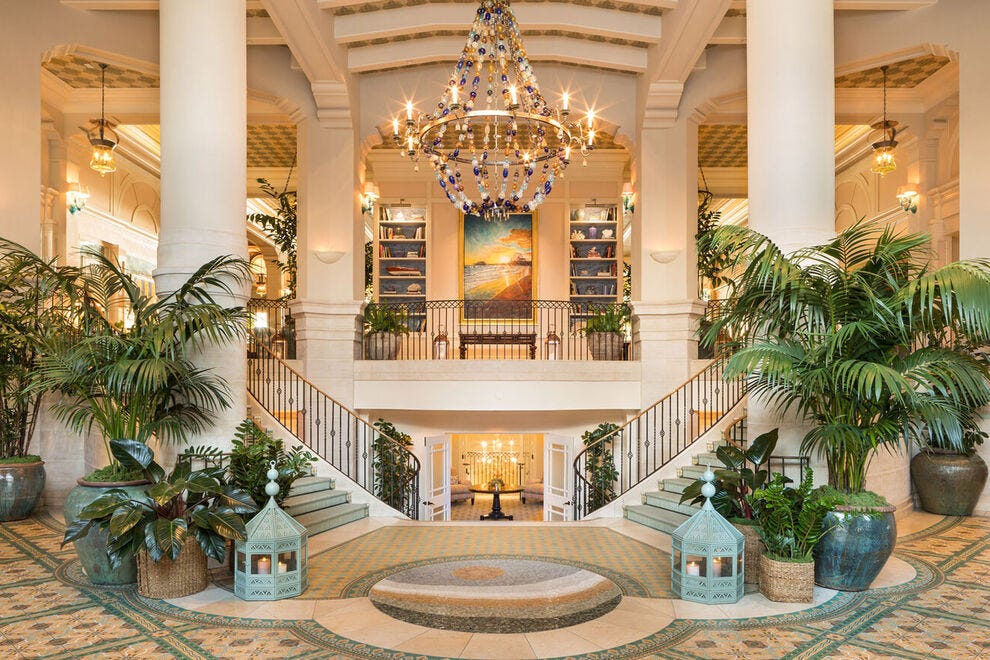 Built in 1926 as an opulent beach club hotel for high-flying Hollywood elite to escape from studio duties, this grande dame has kept her good looks and sense of style. Luxurious accommodations give way to lovely common spaces to indulge in cocktails and culinary treats. The private, guest-only Palm Terrace pool is an ideal place to relax, but the Earth-conscious Sea Wellness Spa is a must-do for soothing urban stresses. The hotel is adjacent to the historic Santa Monica Pier, all of downtown’s dining and shopping and beautiful Palisades Park. 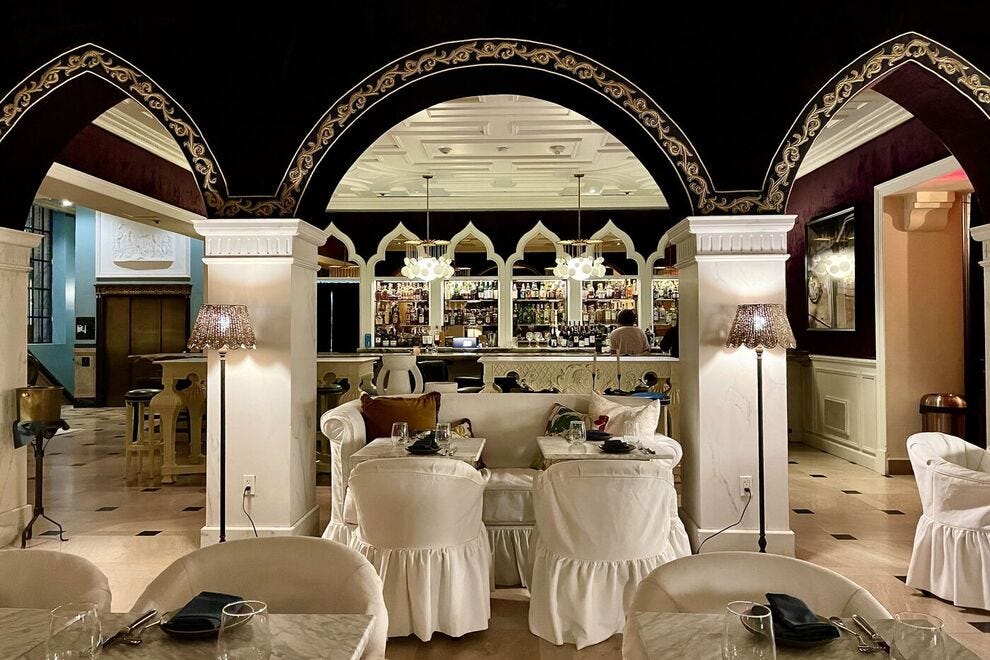 Stepping into a suite in this 1922 Art Deco, Italianate tower, originally the headquarters of the Bank of Italy, feels like stepping into The Great Gatsby. But old school opulence is tempered by a modern and unfussy approach. The hotel’s restaurant, Per L’Ora, pairs spectacular original architecture with comfort. There’s not a hard seat in this sofa-lined restaurant. Through the arched entrance, the bar offers a high perch. Either seat transports you to the glamour of the Roaring Twenties. The cocktail list features both classics and new inventions, while the food menu focuses on small plates — all of which are enjoyed under the ornate gold-and-blue paneled ceiling. 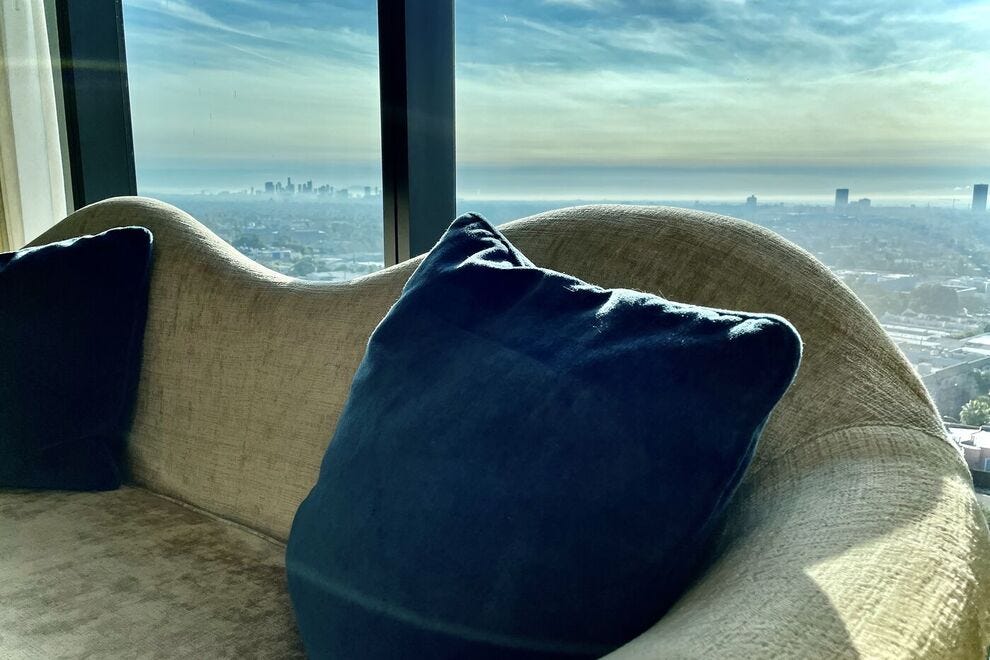 West Hollywood’s Sunset Strip is admittedly more rocker glam than Hollywood glamour. This newer boutique luxury brand from swanky Montage Resorts keeps things bright and breezy, with a light, duck-egg blue and sandy yellow color scheme, echoing California sand and sea. All of Los Angeles spreads out like a sprawling sea below the hip rooftop bar and adjacent pool. The hotel’s spa, tucked away on the second floor, is a quiet haven for some mind, body and beauty work. At ground level, Ospero, an Italian concept from LA celebrity chef Wolfgang Puck, overlooks bustling Sunset Boulevard and The Comedy Store, opposite. 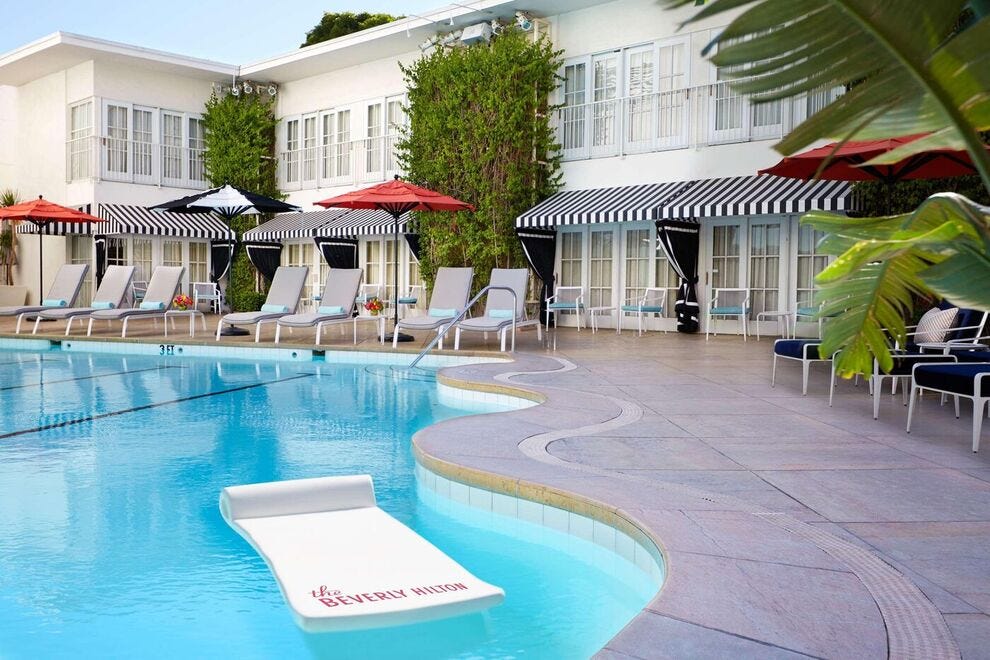 This storied enclave of Hollywood happenings opened in 1955 as a Hilton flagship property. Situated at the crossroads of Wilshire and Santa Monica boulevards, the Beverly Hilton’s $35 million, top-to-toe renovation in 2020 brought a contemporary look to guest rooms, suites and public spaces, without sacrificing the classic mid-century glamour. That’s particularly so in the luxury suites. The hotel’s International Ballroom hosts such events as the Golden Globe Awards and the Oscar nominee luncheon. The Aqua Star Pool, touted as the largest heated pool in Beverly Hills, is perhaps best known for Angelina Jolie’s post-Golden Globe splash in celebration her win. 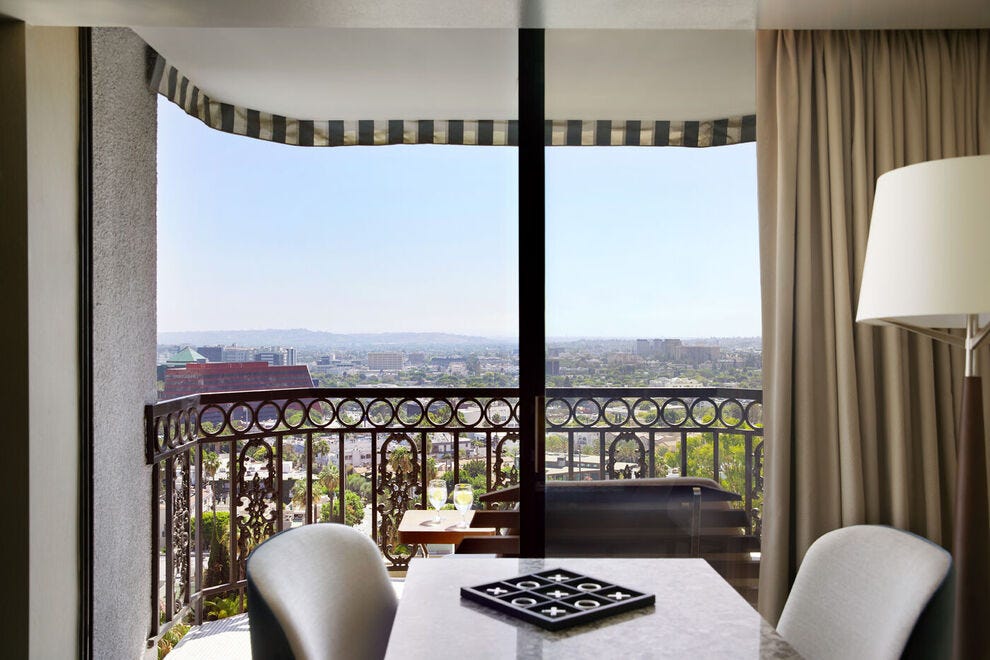 The glitzy London West Hollywood at Beverly Hills boasts all-suite accommodations, the most glamorous of which is The Penthouse, appointed by interior designer Vivienne Westwood. Also atop the building is a spacious rooftop sundeck, lined with private cabanas that surround the pool. Back on the ground floor, the signature restaurant, Boxwood, provides lounge-style dining during the evening, perfect for a quick bite before attending an industry event in the private screening room. 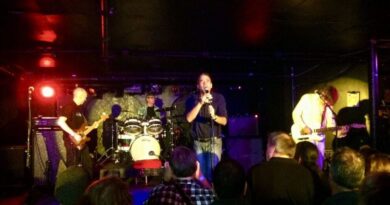 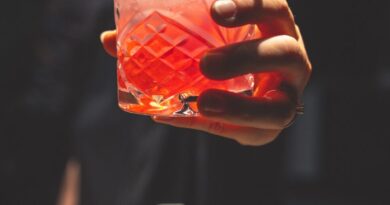 Cheapest Bars in Barcelona to Drink on a Budget 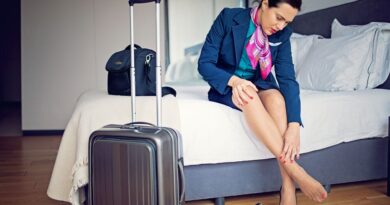 How to prevent it and get rid of it