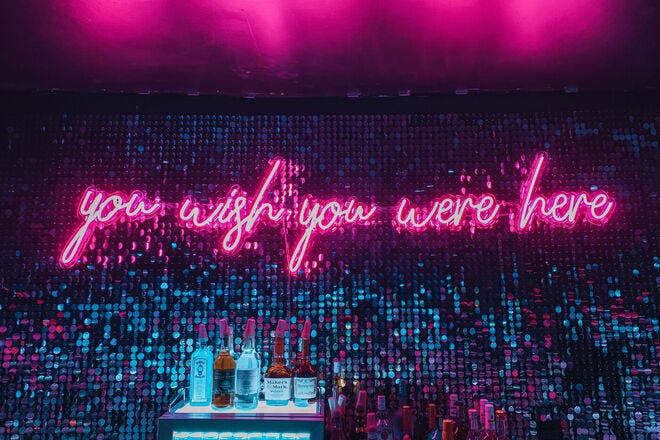 Nightlife is no longer just an ear-splitting dance club or bars bursting with weekend revelers – although there are plenty of those from which to choose in Chicago. Evening diversion is as diverse as the city itself, with destinations specializing in comedy, arcade games, burlesque, live jazz, blues, hip-hop and rock ‘n’ roll sets. There’s something for the flannel shirt and jeans tribe as well as those who feel compelled to out-sparkle everyone else.

For a lively lounge experience, head to the landmark Green Mill Cocktail Lounge for jazz or Rosa’s Lounge for blues. An unpretentious Pilsen bar transforms into an equally unpretentious music and dance venue by night with entertainment as diverse as the guests – that would be the Giant Penny Whistle. Cruise between four distinct venues situated in three adjoining old buildings for a night of American Roots Music, barbecue, beer and cocktails at Fitzgerald’s Nightclub.

If you “love the nightlife and got to boogie on the disco ’round, oh yeah,” get thee to the new Flash Dance Club. Inspired by Andy Warhol’s Factory, the venue whisks revelers back to the disco era with pop art, flashing lights and multiple bars decorated in shattered mirrors (a la Warhol’s Factory). Slip onto the big red couch In the Banana Lounge and relax before enjoying Chicago artists in the Lounge and two-story Flashback Room late into the night – the club stays open until 4am on Friday and 5am on Saturday. Order bottle service from a six-pack of Red Bull to a magnum of Grey Goose or Dom Perignon. The venue is open Friday and Saturday nights. Book a table in the front room, the dance floor or The Pad (back room second floor).

Recommended for Best Nightlife because: You’ll wonder if Bianca Jagger and Cher are just around the corner at the club whisking revelers back to the wild, care-free disco era. 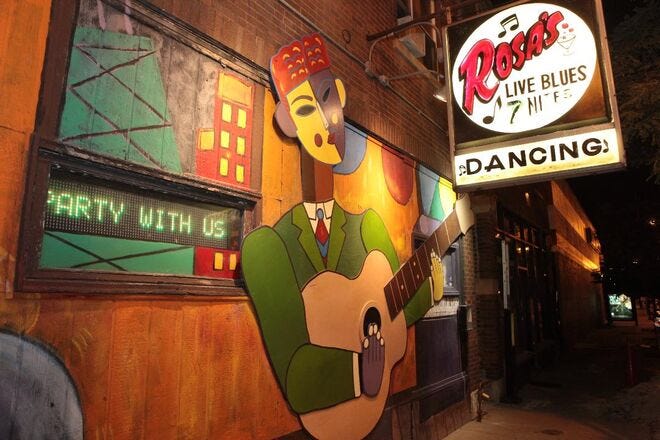 Rosa’s Lounge, circa 1984, is not a 21st-century re-creation homage to family-owned blues bars – it’s the real deal. When you want to hear great live blues without pretension but plenty of sincerity – this is your destination.

Order a drink and enjoy the diverse crowd that fills Rosa’s to hear the likes of harmonica genius Sugar Blue, Lil’Ed Williams with The Mama Rosa’s All-Stars Band and emerging local and national artists like Sheryl Youngblood. There is a cover charge and full-service bar to meet guests’ needs (no drink minimum). Tony, the friendly owner, named the place after his mother who helped him open the club, and he still takes care of his guests every night. It’s a sweet place.

Recommended for Best Nightlife because: Rosa’s Lounge is a friendly, family-owned blues club where you can see the country’s top blues names in an intimate setting.

Jacky’s expert tip: Fill your belly before because Rosa’s serves only sturdy drinks and great music. Parson’s Chicken & Fish or any of the inexpensive taquerias are good bets. 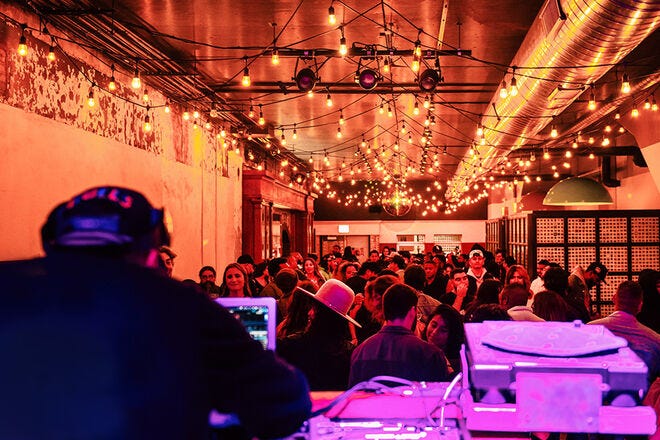 Forrest Gump could have said, “Life is like a night at the Giant Penny Whistle, you never know what you’re going get.” It could be honky tonk and country classics or disco, House, R & B, Salsa, Cumbia or Hip-Hop. Just beyond an unassuming facade, the venue reveals an expansive tavern and music spot that transforms from a neighborhood watering hole for a shot and a Hamm’s to a late night dance and music club with cocktails like the “Big Mando” and the “Give Me Attention.” With music this eclectic, expect diverse clientele and a different vibe every night. One night it’s Chicago style House music and another you’ll be moving to Salsa and Cumbia dance parties. The tavern is dog friendly before 10pm and when all that dancing and socializing gets you hungry, Coyotes on 18th street is a good bet for late night grub. Feel free to bring in bar snacks from La Michoacána across the street.

Recommended for Best Nightlife because: Unpretentious bar transforms into an equally unpretentious music and dance venue by night with entertainment as diverse as the guests.

Jacky’s expert tip: Parking up front is free after 10pm and or scour side streets for free parking. 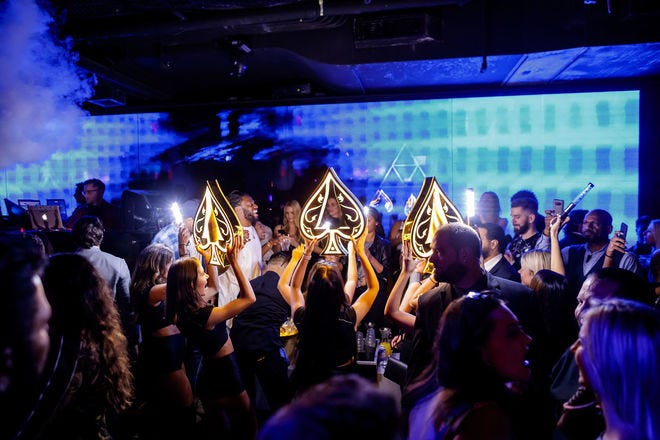 The Underground is known for its ACE philosophy – Art, Culture and Entertainment, as well as Fashion Shows. The nightclub takes its tenor of exclusivity seriously with a military theme and unmarked basement level entrance. Bottle service and celebrity sightings are de rigueur after accessing the cavernous bomb shelter entryway where DJs spin until the sun comes up and candlelit ammunition crates serve as tables to hold your top-shelf cocktails.

Party with a mix of Chicago-based DJs and nationally-recognized musical performers. You can also expect top electronic and dance music talent from around the world. The venue has hosted nationally-recognized artists such as Jack Harlow, Kehlani, Brandi Cyrus, Fat Joe, Zack Bia, Chantell Jefferies, 50 Cent, Bazzi, Swae Lee, and T-Pain.

Recommended for Best Nightlife because: The Underground hosts nationally-recognized artists year-round and during Lollapalooza and Summer Smash afterparties including the likes of Ludacris, Wale, The Cool Kids and others.

Jacky’s expert tip: Packed to the rafters by midnight, the club churns with partiers on theme nights that range from costume parties to fashion shows.

Read more about The Underground Chicago → 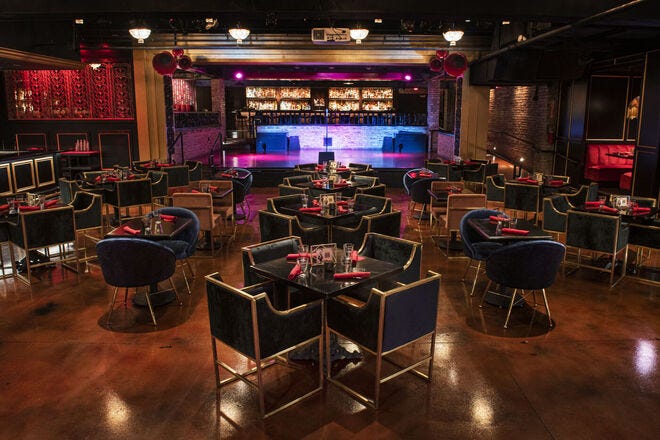 Chic and sexy, Untitled Supper Club is an upscale dining and entertainment spot with a prohibition-era atmosphere. In addition to an American supper club menu, the venue boasts the country’s largest collection of curated American Whiskeys (more than 550 plus seven Michelin Bib Gourmand awards) which should get you in the mood for live entertainment. With differently designed rooms and four bars – the Library, Cabaret, Back Stage and Drawing Room – you’re sure to find something appealing. Untitled offers tribute shows, sensual burlesque performances, specialty cocktails and one of the only opportunities for Chicagoans to experience table side Absinthe fountains. Two seatings are available nightly so be sure to make a reservation.

Recommended for Best Nightlife because: Burlesque and variety shows, tribute performances, supper club menu and the country’s largest collection of curated American Whiskeys add up to some fine nightlife.

Jacky’s expert tip: Untitled is open Wednesday-Saturday and the atmosphere can change by the evening or even by the room within the space. 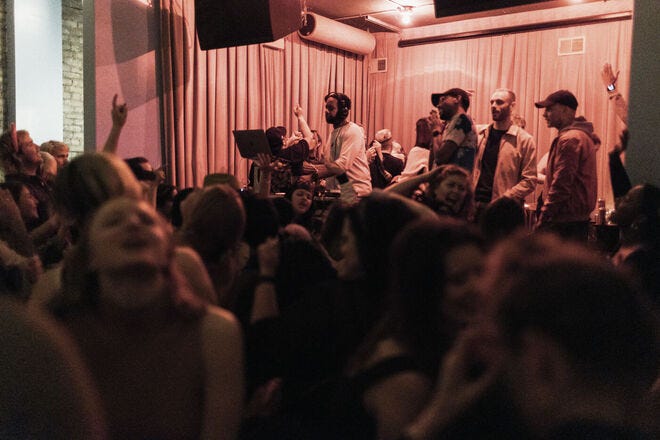 No matter what night of the week you ache to get out, The Whistler has your back – and brain. There’s a live show most nights: it could be jazz, rock, electronic, country, soul, acid, breakbeats, 70s and 80s Japanese Jazz on vintage vinyl, readings and other various and sundry entertainment to tickle your neurons and move your body. Consider the monthly night of Rare Cuts, a celebration of all things disco and its offshoots like French House and New Wave.

The Whistler is also a craft cocktail bar (helmed by three-time James Beard award-nominated Head Bartender, Alex Barbatsis) and offers a storefront art gallery so you can sip, observe and remark about the state of art, music. politics, the Edge of Tomorrow (that’s a cocktail) and then have another.

Recommended for Best Nightlife because: Travel guides adore The Whistler for reasonably priced, creative drinks and locals love it for its commitment to local musicians and artists.

Jacky’s expert tip: It can be a squeeze on weekends so remember there’s outdoor seating in the summer in the patio out back.

Read more about The Whistler → 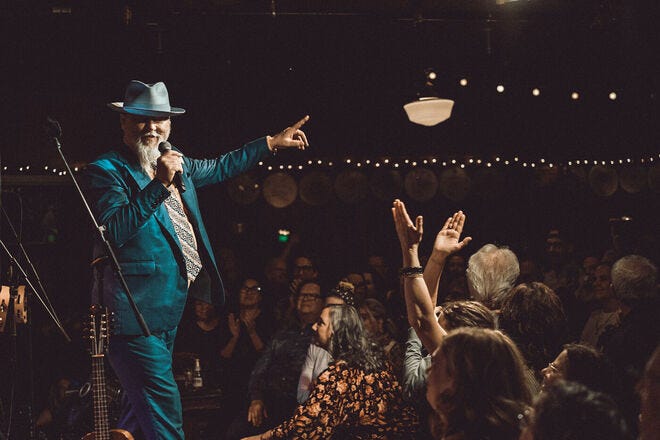 The venue that the New York Times called “a musical gem” is an entertainment campus focused on live music. There are four distinct venues (Fitzgerald’s Nightclub, Patio, Sidebar and Babygold Barbecue) across three adjoining old buildings in Berwyn just 20 minutes west of the Loop. Some of the biggest names in the American Roots Music scene as well as emerging artists in folk, country, blues, Americana, bluegrass and jazz perform. Sidebar is a neighborhood cocktail lounge with a stage for nightly live music and the restaurant serves barbecue as it was meant to be – with white bread and pickles. Public transportation is nearby (it’s six blocks from the Forest Park blue line stop at Oak Park Avenue) but there are also parking spots nearby. Bartenders are attentive and the venue’s partnership with nearby Kinslahger Brewery yields two house beer brands in addition to a full list of well-priced cocktails.

Recommended for Best Nightlife because: If you lean more toward boots and beer rather than stilettos and bottle service, Fitzgerald’s should be your hangout. 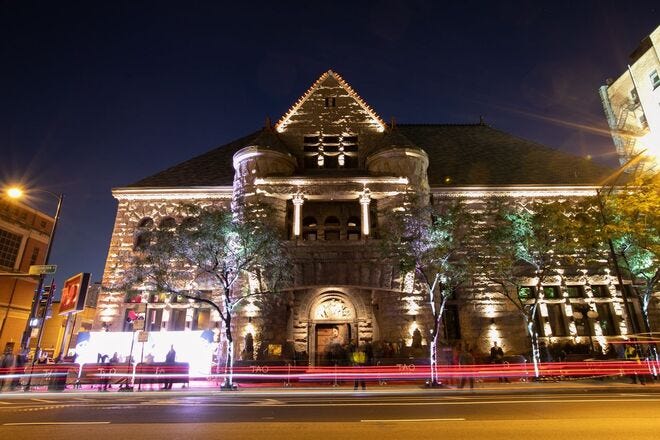 If you want to feel as though you’re in Vegas, don your sparkles and head to TAO Chicago, the midwest outpost of the Las Vegas and NYC nightclubs.

Upstairs from the massive Pan Asian restaurant, the other half of the TAO Chicago experience is a 7,000-square-foot nightclub that you enter through 100-year-old Chinese doors then down a lantern-lit exterior alley.

Sip cocktails (but know that bathroom lines can feel interminable), order bottle service and peruse the multi-sensory scene in the intimate front nightclub space or the expansive rear room set underneath a 10-foot bell and hypnotic disco ball. The two nightclubs are separated by an operable wall that transforms into a one-room venue. Expect local and national top-tier artists and DJs like Machine Gun Kelly, Deadmau5, and Tiesto.

Recommended for Best Nightlife because: Located in the building that was the onetime home of the Chicago Historical Society, TAO dazzles with mirrored pendants floating above the dance floor.

Jacky’s expert tip: Do yourself a favor and get there before 11 pm on weekends or entry is iffy. 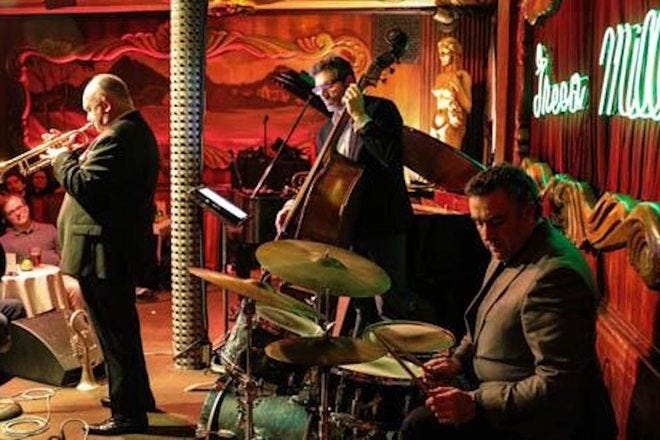 Inspired by Clark Monroe’s Uptown House in 1940’s Harlem, the Green Mill attracts tourists and jazz aficionados nightly. Once a hangout of Al Capone, Charlie Chaplin and Gloria Swanson, the Green Mill has what modern clubs lack – character. It was also a speakeasy during Prohibition and retains an early 20th-century look and feel. The live music schedule is packed with jazz, big band, blues, and swing music, plus the popular, long-running Uptown Poetry Slam on Sundays. Cocktails are reasonably priced (don’t expect anything fancy with egg whites), but if you want to enjoy them from a table, get there early and definitely before the bands go on. Expect jam sessions with local artists as well as name musicians performing traditional, contemporary, Bebop and improvisational jazz.

Recommended for Best Nightlife because: Green Mill is perfect for those who appreciate live jazz in an informal but classy atmosphere.

Jacky’s expert tip: If you want a table, get to the cash-only venue early and enjoy cocktails before bands play their first note. 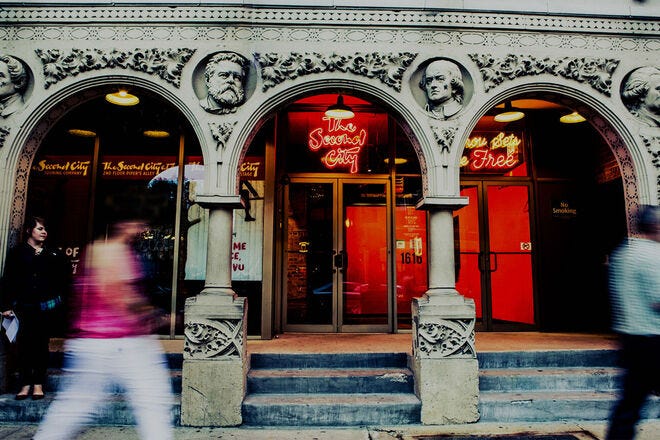 Who doesn’t need a few laughs during the cultural chaos that is life in the USA? The world’s premier comedy theatre and school of improvisation, Second City, pokes fun at boomers, millennials, Gen Z, media, and the *&%#@! going on in DC.

Everyone with a pulse knows that Second City launched some of the biggest names in the business, including Steve Carell, Stephen Colbert, Tina Fey and countless others. Since its creation in 1959, the show claimed Old Town it’s home when the founders wanted a theater to practice their own, Chicago-style routine of sketch and improv. The small audience is packed in front of a sparse stage with only a few chairs, and the show covers current topics, followed by some improv using audience-suggested topics. If the main stage is sold out, don’t hesitate to see Second City, etc.

Recommended for Best Nightlife because: The Second City has launched some of the biggest names in the business including Tina Fey and Stephen Colbert.

Jacky’s expert tip: Make a plan to eat at a nearby restaurant before hitting the 10 pm show. Twin Anchors, one of Sinatra’s hangouts, and Fireplace Inn (1969) both ooze nostalgia. 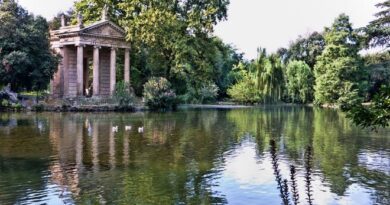 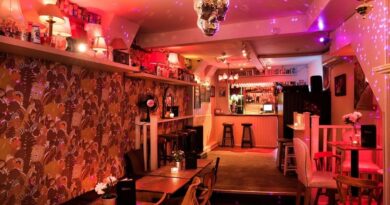 Not Your Average Hole in the Wall 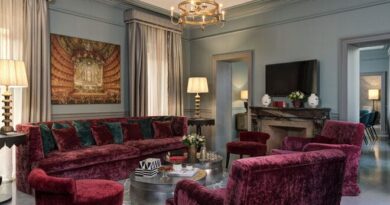