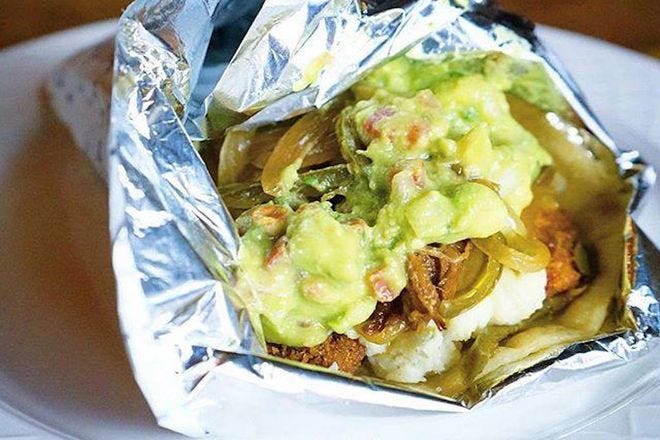 Trying to define exactly what constitutes Toronto’s Entertainment District is difficult. But if we look at it as the area from Yonge Street in the east to Spadina Avenue in the west, and from the Lakeshore south to Queen Street on the north side, we’re left with an area that encompasses great shopping, live Broadway-quality theatre productions, professional sports and some of Toronto’s most exciting nightlife and attractions (like that famous CN Tower). Of course, this area is also chock full of many of the city’s most talked-about restaurants.

Momofuku Noodle Bar, the sister restaurant to David Chang’s New York restaurant, is as unique and comforting as you have heard. Located in a giant glass cube in the middle of downtown Toronto, it is the place to slurp a bowl of ramen and indulge in some steamed pork buns.

Ricardas is ready and willing to welcome you, even for a leisurely breakfast where you can sup on banana bread French toast and scroll through every nook and cranny of your social media feed. Or, even more, revolutionarily, you can look around and enjoy your environs.

Our top 10 Entertainment District restaurants are subject to change often, as is the trend for anything downtown. Get busy exploring and replace your missing calories in the most rewarding fashion.

Flock Rotisserie is miles away from Swiss Chalet, even though the two both claim to have mastered the rotisserie chicken experience. We think you should trust Flock’s word, as they specialize in naturally raised chicken without hormones or antibiotics. It is gourmand, without having to ask for special sauce (but no judgment if that is your jam – you are in good company with many Canadians). Even more interestingly, salads are as much the main event as the meat and often don’t have any chicken in them, but instead goodies like pickled honey mushrooms, dried currents and French lentils. 14 stools are available for sit-down patrons, who can alternate between licking their fingers and watching the slowly rotating birds, which can be as mesmerizing as watching a roaring fire.

Recommended for Entertainment District’s Best Restaurants because: Quick service that is low on the carbs (and on the wallet).

Courtney’s expert tip: Order ahead on their website to make getting in and out as easy as possible. Make sure to grab one of their brownies for dessert. 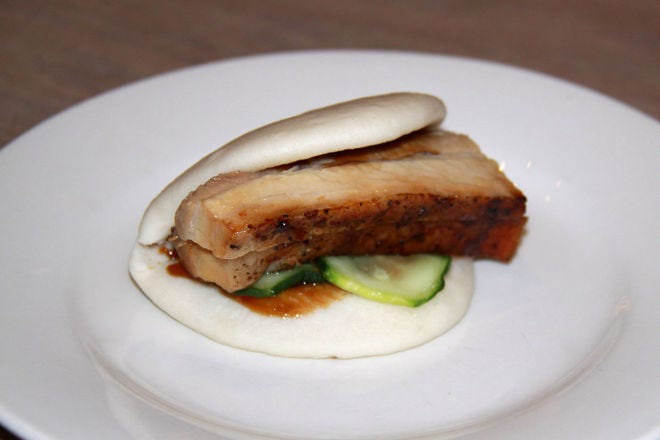 When news broke that David Chang, the NYC chef with the cult following, was bringing his Momofuku restaurant brand to Toronto in 2012, the city was abuzz with excitement. Momofuku in Japanese translates to “lucky peach.” Now that we have the linguistics lesson out of the way, let’s get to the details. The prime downtown location in the Shangri-la Hotel has four restaurants in one. Go big or go home.

Momofuku noodle bar is prized for its ramen noodles and pork belly buns. David Chang introduces twists on authentic recipes, making them just different enough to keep the eater interested. Slather the amazing house-made kimchi on everything. Eat at communal wooden tables and make sure to make a stop at the Milk Bar for some crack pie, which has a “toasty oat crust and gooey butter filling.”

Courtney’s expert tip: Don’t miss the pork buns. You won’t regret it – although small, the fatty meat is incredibly hearty.

A meal at Byblos will transport you to a Mediterranean island, where the food is fresh and the time is ample. Small shareable plates are delightful. Lamb ribs are so succulent that the meat falls off of the bone. Thick yogurt dishes come savory rather than sweet. You also have never had a hummus like theirs, with wagyu beef ragu, Syrian seven spice and pine nuts to put that tub you get from the grocery store to shame. Byblos recommend that two people share six dishes, which is a plentiful amount. If you like saving room for dessert by the likes of orange blossom mousse or baklava, then pace your small plates. Byblos was believed to be the world’s oldest city, yet it fits right into modern Toronto.

Recommended for Entertainment District’s Best Restaurants because: Upscale Mediterranean cuisine served family-style for those times when you want a little bit of everything.

Courtney’s expert tip: If you have a group of 8 or more, there are some delightful prix fix menus just for you. 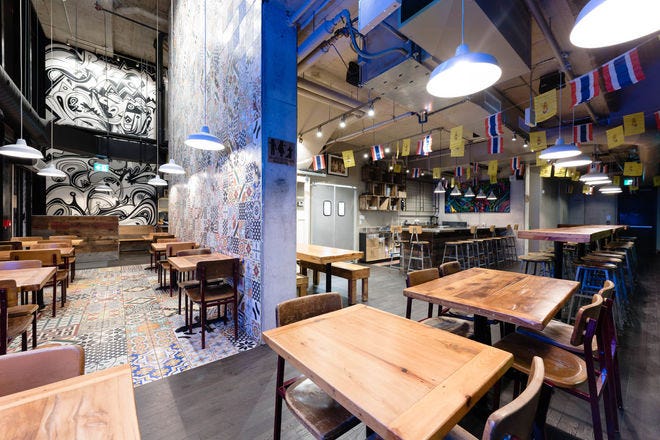 Khao San Road is the backpacker’s ghetto in Bangkok. Judging by the line-ups out the door, Torontonians were desperately seeking authentic Thai food. Small tables, a hip vibe and the freshest of ingredients lead to an eating experience that will blow your Thai takeout out of the water. Menus cater to eating preferences, from vegan to gluten-free. Dishes may appear standard, but when you try the Green Curry or Pad Thai with fresh noodles and sauce that has been motor and pestled to perfection, you will think differently. They don’t take reservations, so come early to make an informed food decision. Fond food memories await.

Courtney’s expert tip: There are no reservations available here, but please trust us: it is worth the wait. They typically move things along quickly, and you will rarely have to wait for more than half an hour. 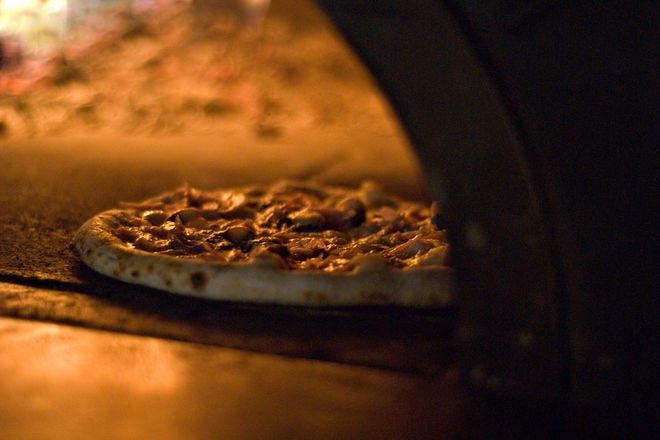 This is the real deal kind of pizza. You may find yourself enthusiastically affirming the taste of real Neopolitan Pizza at Pizzeria Libretto in Italian. Or, if words fail you, “Mmmm” works well in most languages. This pizza has a soft chewy crust that is beautifully blistered by the piping hot oven. Each pizza is made as a single serving and is not overwhelmed with toppings. Cheese and toppings such as housemade sausage or a trio of mushrooms merely accent the pie, allowing it to be melt-in-your-mouth delicious. The result is a pizza that feels lighter than it looks. Even people who are convinced they will just have a slice may find themselves downing a whole pizza. Don’t judge yourself.

Recommended for Entertainment District’s Best Restaurants because: Pizzeria Libretto’s authentic Neopolitan baked pizza pies are ready in a flash, but you wouldn’t mind waiting for some of the best pizza in Toronto.

Courtney’s expert tip: Gluten-free crust is available at all five locations and they recently added a vegan mozzarella.

For many years, Greek restaurants were clustered in Toronto’s Danforth neighborhood. Volos is the exception: a modern Greek restaurant in a spacious, airy room dedicated to good-quality Hellenic cooking in Toronto’s Entertainment District. The menu may have some of the familiar ingredients that you associate with Greek food, but they are elevated with fancier touches. Take the grilled octopus that comes with walnut eggplant mousse, red wine vinaigrette and grilled figs. The upscale menu focuses on seafood but has some wonderful meat dishes and baked pies which come smothered in sauces ranging from bechamel to saffron lobster sauce. It will be difficult not to lick your plate clean.

Recommended for Entertainment District’s Best Restaurants because: This formal Greek restaurant has an incredibly exciting menu that that won’t make you miss more traditional flavors.

Courtney’s expert tip: Take a sip of one of the many Greek wines on their wine list. You could go for your typical Italian or French varietal, but the Greek choices pair beautifully with the menu. 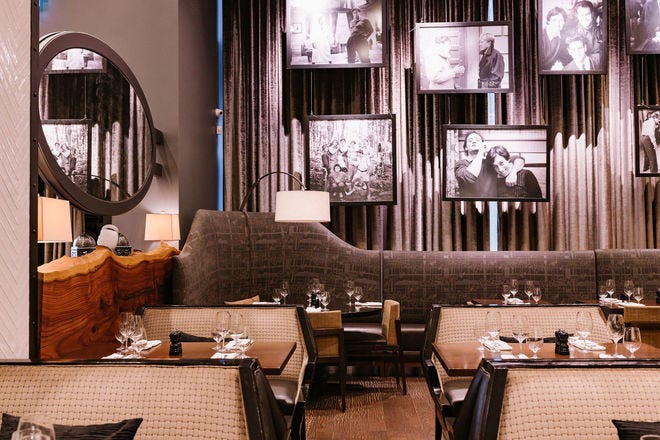 You would never confuse downtown Toronto with California. Besides having a formidable winter, it also likes a New York pace and prides itself on efficiency rather than a relaxed attitude. However, after avocados reached celebrity status, the intrigue in Californian cuisine picked up momentum. Montecito Restaurant brings a taste of California to Toronto’s Entertainment District for those that need a breather from avocado toast (which of course is on the Sunday brunch menu). A collaboration between Hollywood Director Ivan Reitman and Innov8 Hospitality, Montecito is steps from the Toronto International Film Festival Lightbox. Farm-to-table Californian cuisine uses Canadian ingredients, like the Ontario Grassfed Striploin and B.C. Mussel Tagliatelle. Simple ingredients showcase the best in Canada coast to coast.

Recommended for Entertainment District’s Best Restaurants because: Craft cocktails, California-Canadian cuisine and a location literally set by a Hollywood director. 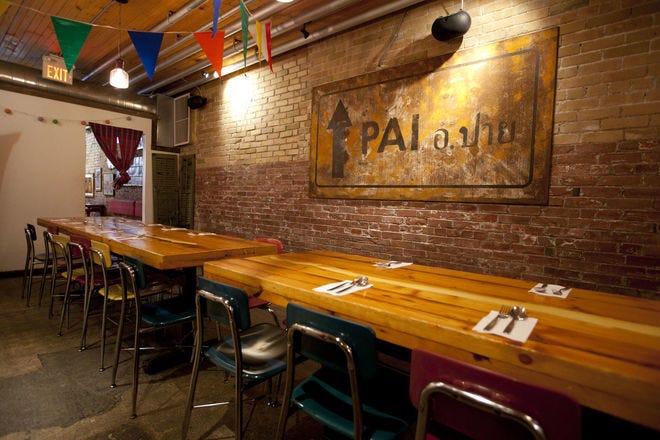 As you walk into the basement of a nondescript brick building, you either think, “This is going to be good,” or “This is going to be horrible.” Luckily, Pai’s humble abode caters to the former thought. There is usually a wait, but it is Toronto and it moves fast thanks to the 80-seat capacity. Things get loud in here, with excited patrons, booming music and sizzling dishes making their way to new tables at breakneck speeds. Named after a spot in Northern Thailand, Pai specializes in family-style dishes, divided into “Snacks and Starters” and “Mains.” Add the papaya salad and the Thai omelet to your usual repertoire.

Recommended for Entertainment District’s Best Restaurants because: “It all started on an elephant” like so many good things in life.

Courtney’s expert tip: They are closed for all statutory holidays (and Canada has a few more than the US). 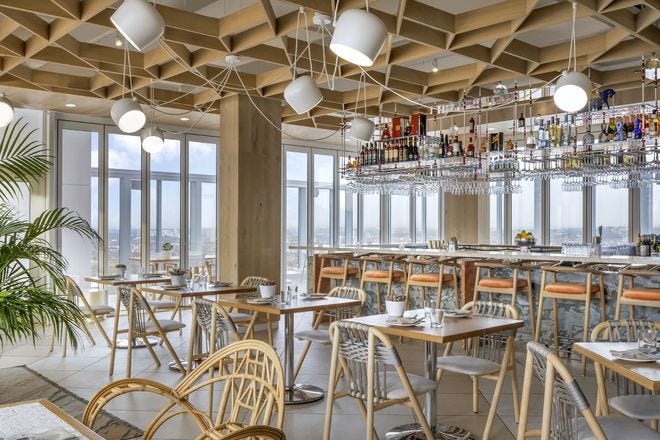 Taking the elevator to the 44th floor of Toronto’s Bisha hotel catapults you to a different dimension. The light and airy patio, light wicker furniture and California cool will make your photos reflect an LA sensibility. For breakfast, start the day sensibly with an açai bowl piled with toasted coconut, bananas, fresh berries and chia seeds. For dinner, share a lamb shoulder with your table or a whole roasted cauliflower sprinkled with goat cheese, shallot and herbs. The open kitchen adds a further breeziness while the white couches beg you to take small bites so as you don’t stain anything.

Recommended for Entertainment District’s Best Restaurants because: What’s that in the background? Oh, just one of the most jaw-dropping views of the CN Tower.

Courtney’s expert tip: Reservations are a good idea, especially if you are coming on Thursday, Friday or Saturday nights. 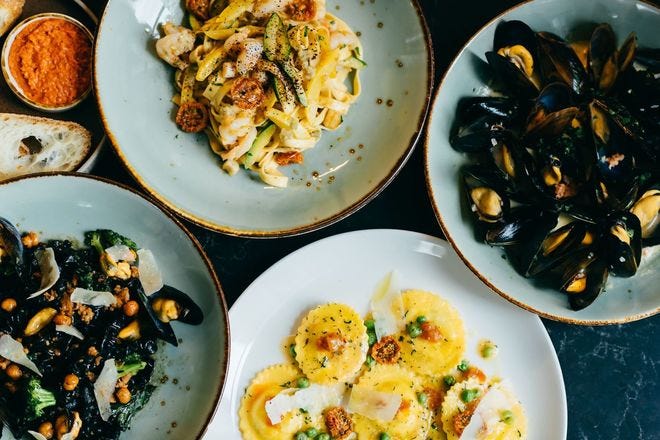 The sleek interior design of Ricardas is immediately relaxing, including marble tables with hardwood floors. The space is inviting with its clean lines, but it is worth staying for the baked goods alone. Breakfast is a treat any day of the week, but especially Sundays with live jazz. Expect all the bennies you could desire as well as a croissant version of the standard croque madame and banana bread French toast. Enjoy warm bread served with tomato olive spread if you are coming for lunch or dinner. The black and white lobster ravioli is a standout, as are their flatbreads, with toppings ranging from fior di latte, chorizo, octopus and truffle oil.

Recommended for Entertainment District’s Best Restaurants because: Jazzy, upscale and fun – Ricardas knows how to set the stage for some truly amazing eats.

Courtney’s expert tip: Dine-in on your birthday week and get a discount equivalent to your age. If you are turning 101, things are in your favor. 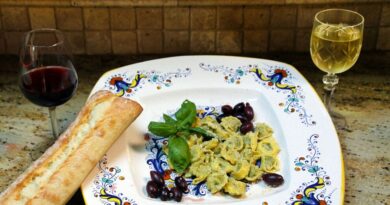 How to make an easy Italian walnut pasta sauce 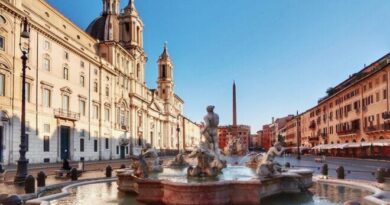 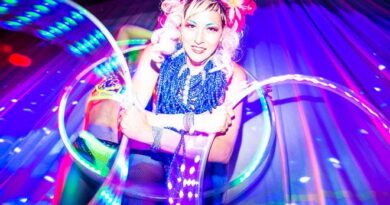