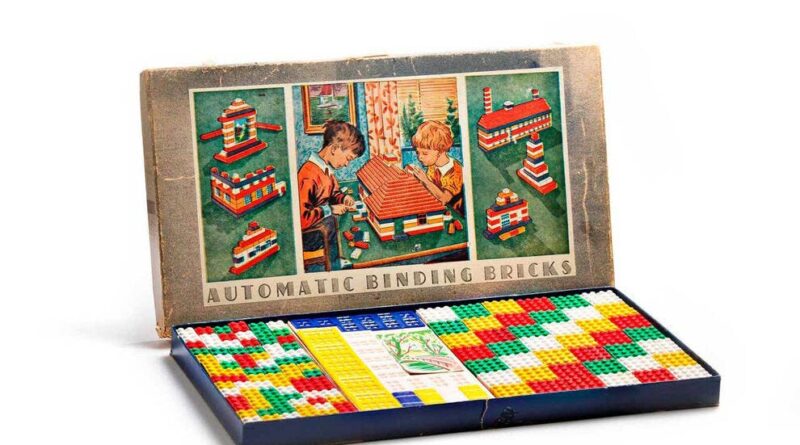 When Ole Kirk Kristiansen started building toys out of his workshop in Billund, Denmark, back in 1932, he never could have guessed that his creations would hit the industry like, well, a ton of bricks and that his company would go on to become one of the most beloved in the world.

Ninety years later, the humble little LEGO brick remains a true pop culture icon, instantly recognizable and, literally, the foundation for everything from toddlers’ first experiences with building to adult masterpieces of art and design.

Over the past nine decades, the LEGO Group has produced more than 400 billion (yes, billion) LEGO bricks and 9.6 billion minifigures — making it the largest population on the planet! There are 10 LEGOLAND parks around the world, four feature-length LEGO brand-inspired movies and one LEGO House, incorporating activities and exhibits that all revolve around 25 million LEGO bricks.

There are so many impressive and jaw-dropping facts about the LEGO brick, not the least of which is that it was named Toy of the Century, beating out teddy bears and Barbie — twice.

So, what was the journey like to global superstardom? How did LEGO bricks become the stuff of legend? Let’s go back to the beginning.

It started with a wooden duck

“Many people are surprised to learn that the company existed before the LEGO brick,” said LEGO Historian Signe Wiese. “It began with wooden toys in the 1930s, which, in fact, remained part of the product portfolio up until 1960.”

In 1934, Kristiansen named his company LEGO, after the Danish phrase “leg godt,” meaning “play well.” Unbeknownst to him — but a definite foreshadowing of what was to come — the word “lego” also happens to mean “I put together” in Latin.

One year later, he introduced The LEGO Duck, a wooden pull toy with wheels. And that’s where the “duck story” comes in.

Kristiansen’s son, Godtfred (who would later take the reins from his father), used to help out in the workshop. One day, he excitedly announced he had just saved the company money. When his dad asked him how, he explained that, instead of applying the usual three coats of varnish to a shipment of wooden ducks, he had just applied two coats. His dad was furious and made him return to the train station, pick up the shipment and apply the third coat all by himself, telling him he wasn’t allowed to go to sleep until it was done properly.

“That taught me a lesson about quality,” Godtfred admitted. He carved his father’s motto, “Only the best is good enough,” on wooden plaques and hung them in the workshop to remind himself, his three brothers and all employees that “this is how we do things.” That motto – and an unwavering commitment to quality – has remained a keystone of the company’s values for almost a century because, as the LEGO brand founder himself believed, children deserve the best.

The duck also remains a valuable symbol of the LEGO Group, who often use the duck building game to demonstrate their Learning Through Play philosophy. Each person is given the same six yellow and red LEGO bricks and asked to build a duck in 30 seconds. Because there’s no wrong way to build it, it’s an empowering exercise that also encourages open-mindedness as everyone shares their creations and marvels at the diversity and creative ways of looking at something.

The plastic LEGO brick is introduced 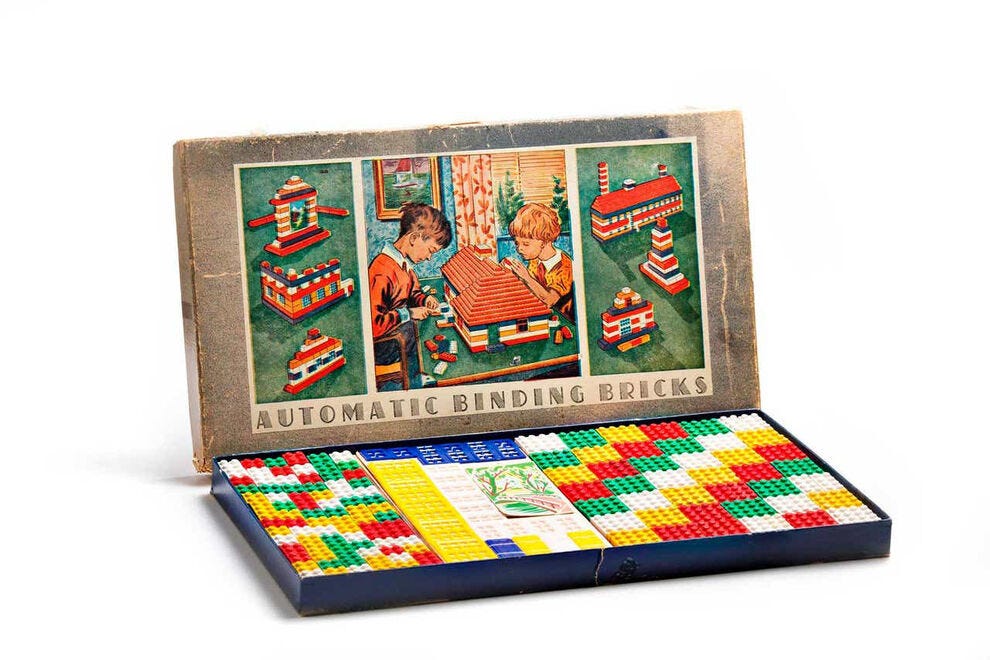 In 1942, Kristiansen himself was forced to find a new way of looking at things when his factory burned down. This was actually the second fire that had threatened to destroy his business and he decided it was time to find an alternative to wood. He bought Denmark’s first plastic injection molding machine and, by 1949, was producing Automatic Binding Bricks that are similar to the LEGO bricks we know today.

Over the next decade, the foundation was set for the company. Godtfred developed the System in Play, ensuring that every piece would connect with every other piece, giving children unlimited possibilities to experiment. “Our idea has been to create a toy that prepares a child for life,” he wrote, “appealing to their imagination and developing the creative urge and joy of creation that are the driving forces in every human being.” 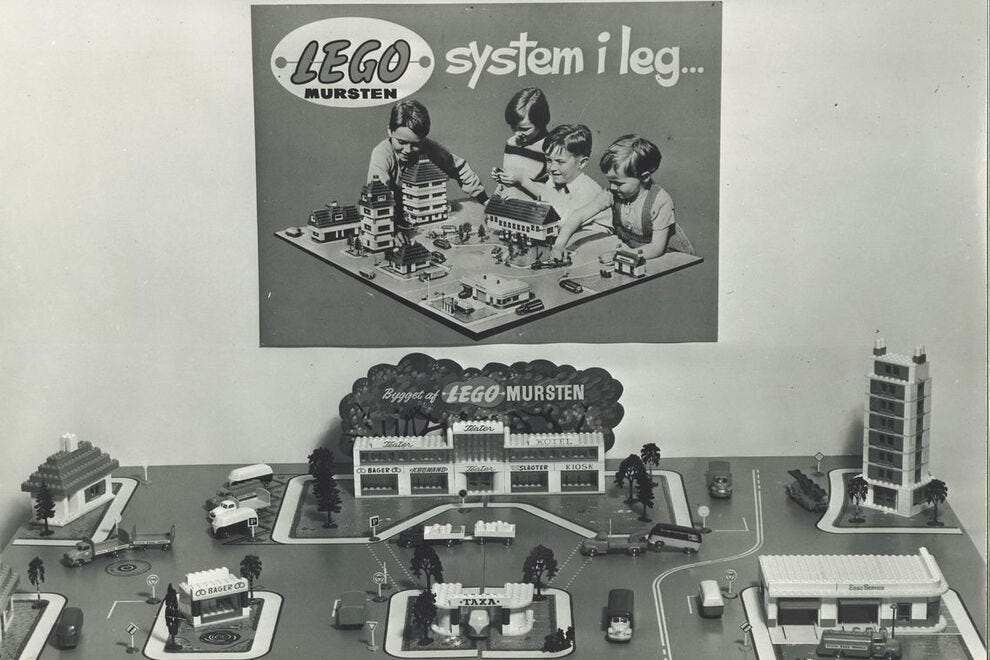 LEGO System from the 1950s — Photo courtesy of LEGO

As Denmark became increasingly industrialized in the 1950s, with more cars on the roads, LEGO Town Plan (now LEGO City) was introduced to help kids learn to navigate this new urban environment. With its realistic and relatable elements, LEGO City remains a popular theme all these years later.

In 1958, the company came up with the stud and tube principle, molding each LEGO brick to the accuracy of a hair’s width (5my/0.005mm) to ensure the perfect clutch power that holds creations together. This interlocking process was so innovative and groundbreaking that the LEGO Group applied for a patent immediately.

“Although the material has changed and production methods have evolved, the LEGO brick has not changed since then,” said Wiese. “Bricks made today will still fit with those produced over 60 years ago.” That consistency and longevity have ensured that LEGO sets get passed down over generations and that the enthusiasm continues.

After another warehouse fire consumed most of the company’s inventory of wooden toys, the LEGO Group decided to stop producing them altogether and change its focus to solely concentrate on the plastic building bricks. 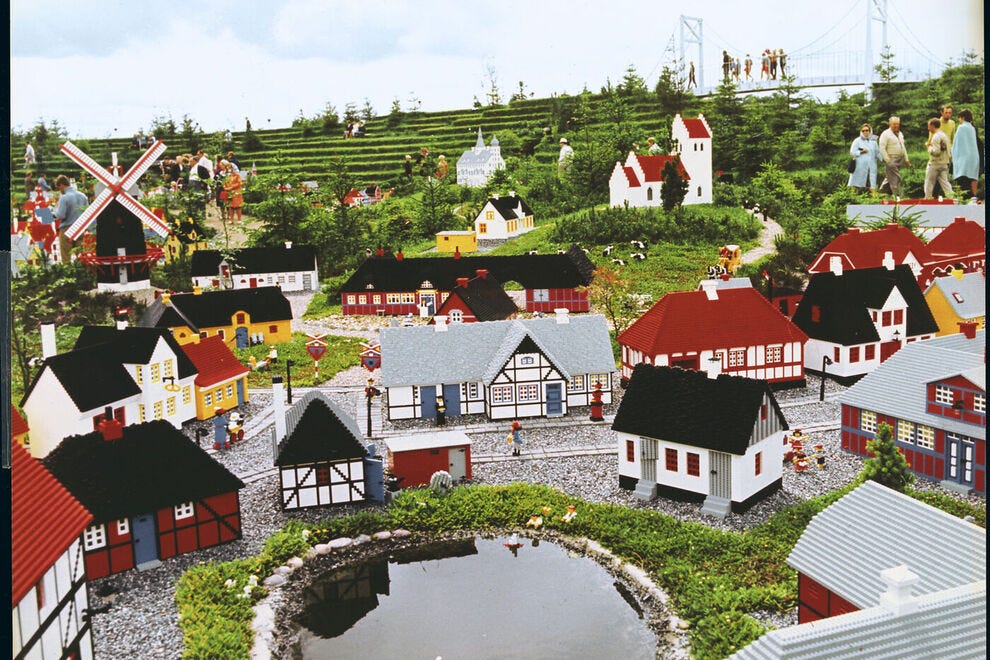 For years, Godtfred had been interested in making LEGO bricks more dynamic. In 1962, the team finally came up with a LEGO wheel that worked the way they wanted it to, expanding the opportunities for kids to create all kinds of vehicles and add movement to their play.

With its growing popularity, the brand found itself hosting more than 20,000 visitors a year who came to the factory in Billund to see the exhibition of finished LEGO models. When this became unmanageable, Godtfred opened the first LEGOLAND in 1968 with the focal point being Miniland, which is still considered the heart of all the parks. The company expected to attract about 300,000 visitors that first season and were shocked when that number reached 625,000. Today, the LEGOLAND parks around the world have a total of more than 15 million visitors annually.

In 1969, the LEGO Group achieved another long-term goal: making bricks that would be appropriate for preschoolers yet would still fit with standard LEGO bricks. The new bricks were twice the size of a standard LEGO brick on all dimensions and were named DUPLO, derived from the Latin word for “double.”

Sets that are out of this world 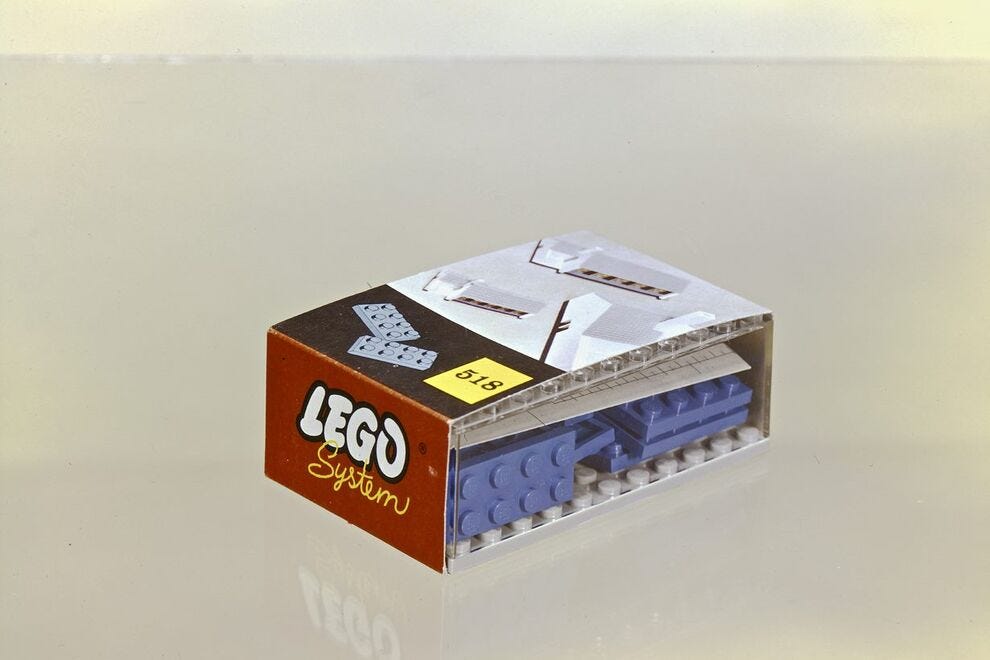 When Godtfred’s son, Kjeld Kirk Kristiansen, became CEO of the LEGO Group in the late 1970s, he introduced the revolutionary “System within the System,” launching Space as the first theme. Inspired by real space technology, the sets featured exciting new elements like radar dishes, antennas and transparent yellow windows. With LEGO minifigures having recently debuted, as well, the Space sets also included astronauts and even some villains, taking role-play to a whole new level.

Fun fact: Each LEGO minifigure measures four bricks high without its hair or any hats or accessories to ensure it matches the proportions of buildings in the LEGO System in Play.

At the time, designers were not allowed to create weapons, so they used studs or other little round pieces to represent them instead. “Today,” as it says on their website, “the LEGO Group recognizes that conflict between good and evil often forms an important part of children’s play as it teaches children about their own — and other people’s — aggression. It helps children to recognize and handle disputes in other situations. However, the LEGO Group has no intention of glorifying war or encouraging violence, and therefore refuses to produce realistic weapons and military equipment with the risk of children recognizing these types of weapons from hostilities around the world. Instead, the LEGO Group supports children, stimulating their imagination by launching only historical and fantasy weapons. With the aim of toning down the conflict element, a good dose of humor is incorporated in the models and the storytelling around the play themes.”

Over the years, the LEGO brand has kept its finger on the pulse of pop culture, partnering with some of the most popular franchises in the world, from Star Wars to Harry Potter. Thanks to these collaborations, they continue to remain relevant and fresh, constantly attracting new users while keeping their old ones. In fact, there’s a huge community of AFOLs (Adult Fans of LEGO) who have been embraced by the company and to whom many new sets are geared.

Putting the priority on sustainability

The LEGO Group’s energy consumption is balanced by 100% renewable energy and they’re working toward having all packaging made from renewable or recyclable materials by 2025. However, their most important — and most challenging — goal is to make all core LEGO products, which are currently made of plastic, from sustainable materials by 2030 without changing their design or compromising on quality or safety. This is a huge goal but, given the company’s 90-year success with innovation and problem-solving, one that is almost sure to be met.

About 150 LEGO elements — botanicals like trees, leaves and bushes, naturally — are already made from sustainably sourced Brazilian sugarcane and, in 2021, the company revealed a prototype LEGO brick made from recycled PET plastic bottles.

The LEGO Group also announced plans to break ground on a new, carbon-neutral factory in Chesterfield County, Virginia, in the fall of 2022. The 1.7 million-square-foot facility will be designed to minimize energy consumption and the use of non-renewable resources and will employ more than 1,760 people.

As the LEGO Group enters a new decade, moving toward its centennial with a fourth-generation Kristiansen at the helm, it shows no sign of slowing down. At the most recent LEGO CON, the LEGO Group’s annual fan convention, the company announced more than a dozen new products coming out over the next six months. There’s something for everyone, from Avatar, Marvel and Minecraft sets to Floral Arts and Minifigure offerings. The LEGO Group also introduced Machine Learning, a new LEGO MINDSTORMS extension in the Robot Inventor app and a reimagined version of the LEGO Lion Knights’ Castle, a highly anticipated 4,514-piece set that reinterprets the classic theme.

Although Ole Kirk Kristiansen would probably be astonished by the far-reaching influence of his little invention, he would be thrilled to see that it’s truly enabled so many kids, adults and families to do what he intended it to: play well. 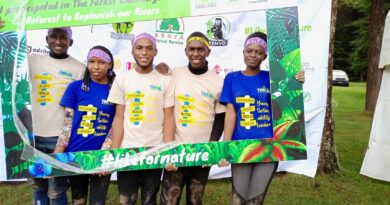 Tourism for a Cause: The Forest Challenge 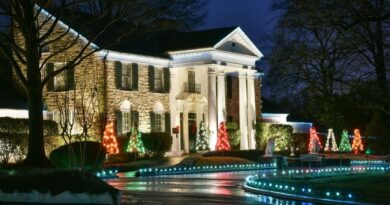 10 best historic home tours for the holidays in the US 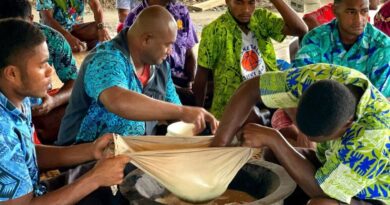